Highest Bond Strengths to Both Dentin and Enamel 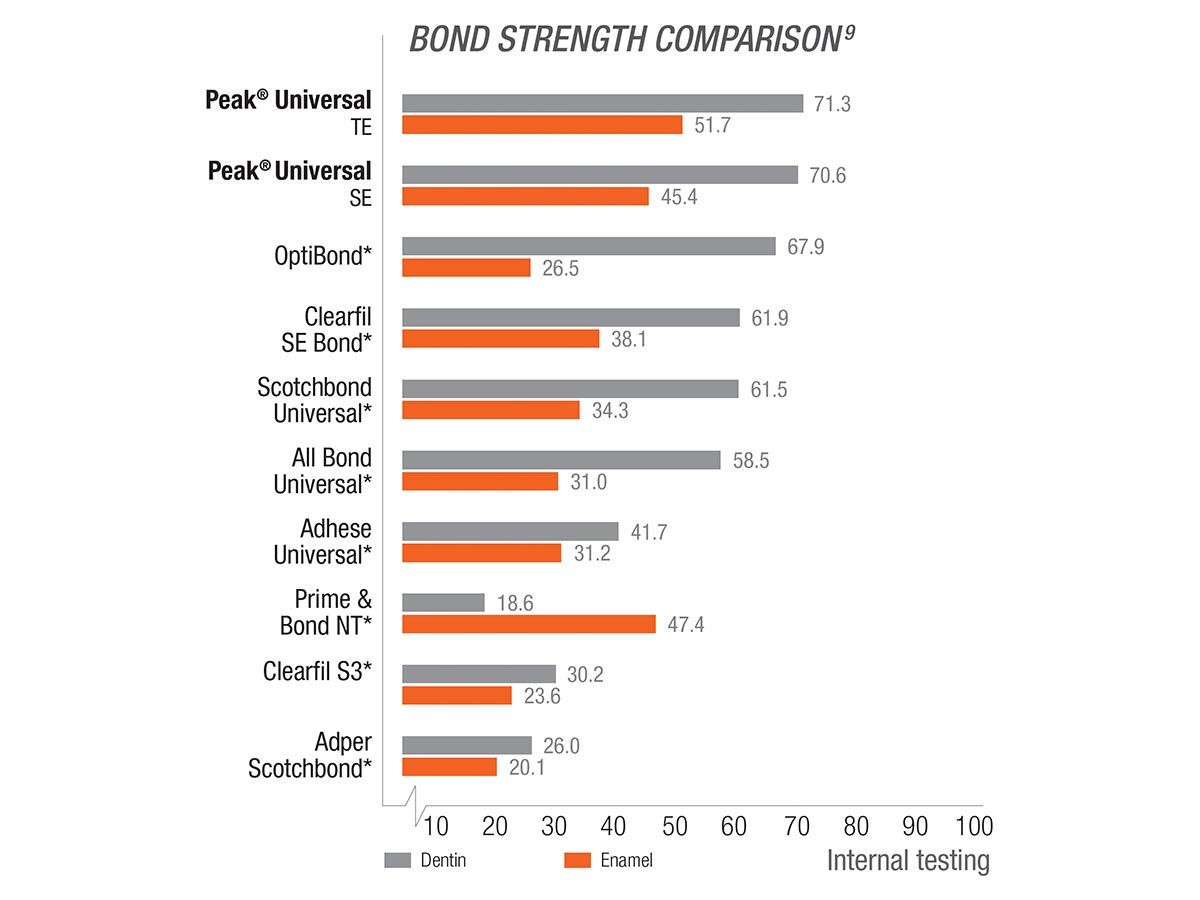 A university study1 conducted at Dalhousie University in Halifax, Nova Scotia, Canada, compared the shear bonding strengths of five bonding systems. The results showed that the Peak Universal Adhesive System yielded the highest bond strengths to both dentin and enamel. An additional internal study9conducted by Ultradent’s R&D team tested 15 materials for shear bond strength. Seven specimens of dentin or cut enamel were made for each set. All sets were prepared according to manufacturer’s instructions and bond strength testing was conducted according to Ultradent’s testing methods, which were since adopted by the ISO as a standard for testing. The strengths were recorded and averaged. The Peak Universal Adhesive System recorded the highest bond strengths on both dentin and enamel.

Ideal for All Bonding Procedures

The Peak Universal Adhesive System features a universal bonding agent that is compatible with both self-etch and total-etch techniques. Its universal formulation works with all bonding substrates—including dentin, enamel, porcelain, metal, composite, and zirconia—and it provides superior bond strengths, making it the ideal choice for all bonding procedures.

Because bonding success begins with a quality etch, both Peak™ SE Primer and Ultra-Etch™ etchant are formulated to create an optimally prepared surface for bonding-resin penetration. When Peak Universal Bond adhesive is applied to the prepared surface, the result is unsurpassed bond strength and complete resin impregnation without voids, which reduces the possibility of residual patient sensitivity.

Because Peak Universal Bond adhesive can be used for all direct and indirect bonding procedures, including post and core procedures, it saves you time and money by eliminating the need for material-sensitive products and reducing inventory in your office.

Peak Universal Bond adhesive is delivered to the preparation site with the convenient applicator brush.

Let's be our friend in LINE Official

You won’t miss our super promotion in every special campaign

Please add our LINE below

What are you looking for?

Try to type your keyword on the right